Bluetooth 1: How Bluetooth Can Turn a House into a Smart Home.

The introduction of Bluetooth in new and existing homes is on the rise. In fact, ABI Research believes there’ll be 1.15bn annual shipments of Bluetooth smart home devices by 2023.

So why is Bluetooth technology so effective in smart homes?

Typically, a smart building uses a central hub to process inputs from a sensor network and operate services like temperature control and lighting. But the new generation of technology, and more specifically Atamate’s, will replace cables between the sensors, hub and services with Bluetooth wireless connections. The Bluetooth protocol uses the technology of the internet of things to cut installation costs, making it easier to add components after installation.

What does this look like in practice? Let's consider a hypothetical smart home: 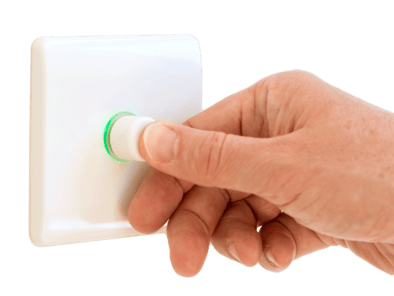 Welcome to 13 Salinas Street. This fictional house was designed to be smart from the outset so when the Trask family took possession, they only needed a brief explanation to understand the five components of the smart system. It was simple enough that Adam and Cathy were able to get the gist even while their sons, ten-year-old Cal and eight-year-old Aaron, were already fighting over the sound system.

It only took a few more minutes for Adam and Cathy to understand how Cal and Aaron can separately control the sound system in their own bedrooms, which put an end to the fighting for an unprecedented full half-hour.

The smart system is made up of the following types of components:

A previous generation of smart buildings would have used wired connections between the various components of the system, which amounted to hundreds of metres of cables. 13 Salinas Street's wireless connections were the only reason the Trasks were able to afford it: by requiring far less physical components between the various parts of the system, wireless technology lowered the cost into the Trasks' price range and minimised the chance of potential points of failure.

There are still cables in 13 Salinas Street because wireless communications don't eliminate the need for a power supply, but far less than there would be if it had been built a few years earlier.

From the designers' perspective, a further advantage of the wireless system is that it makes it a lot easier - and therefore cheaper - to retrofit an existing building as smart.

Which one should you pick in your smart home: Wired or wireless systems? Read our handy article to help you decide.

In the Bluetooth Mesh protocol installed in 13 Salinas Street, every sensor and service functions as a node that relays messages between the hub and other sensor and services, allowing the network to communicate around the sort of interference that Adam causes as soon as he's unpacked his vintage blender.

If he'd got a new one from Argos like Cathy silently wishes he would, it would have had a CE-certified motor that doesn't interfere with the house's communication. But Adam likes his old blender and is oblivious to the magnetic field its motor is causing, which is blocking the route some of the signals are taking around the house. He doesn't need to be aware of it because the Bluetooth mesh protocol is flexible enough to route the signals around the blender-induced dead zone until Adam has finished making his signature mango and celery smoothies for everyone.

Because every room has a sensor unit embedded in the ceiling, there is a central node in every room that can handle not only communication but also power distribution within the room. Atamate's sensor units use the circuits that power the lighting for their own power, although they have relay sockets that allow sensor units to relay power to each other, for example lights, heating or ventilation systems.

Other sockets connect the sensor units to sensors that do not have Bluetooth connections, For example, the unit in the bathroom has wired connections to the temperature sensor in the hot water tank and a humidity sensor behind the bath, which the hub algorithm uses to ensure there are no water pipes leaking where the Trasks can't see them.

Find out what the three important differences are for hot water in conventional and low energy homes.

13 Salinas Street was completed in 2019, so what it didn't incorporate were any of the new energy harvesting technologies that its designers - ie, us at Atamate - were already planning to incorporate into future buildings.

The principle behind energy harvesting is that a device is powered in a way that doesn't require it to be plugged into the mains or to use a battery. A building is awash with stray energy and firms like EnOcean have recently been offering technology that can harvest it to power the devices that make a building smart. For example, a sensor can be powered by a photovoltaic cell so it only needs to draw power from the mains when the room is dark.

Another example is the Peltier element that can generate electricity from a heat differential as small as 2°C (3.6°F), which makes a radiator a miniature power station. Although most new builds use electric heating, smart technology offers savings to existing buildings using central heating systems with radiators so Peltier elements are likely to be extensively used in retrofits.

Other systems harvest the energy used to press a button or throw a switch. The Bluetooth low-energy switch produced by ON Semiconductor harvests the energy used when it's pressed and uses it to generate the Bluetooth signal to switch a device on or off.

“By replacing a conventional light switch with an energy harvesting switch, the need for a physical connection between the two is removed which cuts capital costs and makes it easier to add more lights or to move the existing lights in the future.”

From the perspective of a wireless smart building, perhaps the ultimate energy harvesting technology is one that can draw energy from the wireless signals themselves, making the internet of things into the power source for the internet of things. A company called Williot promise it will be possible in 2020 when they roll out a chip the size of a postage stamp that can draw power from radio or microwaves and use it to power a sensor and signal what it detects.

With such a tiny requirement for both space and power, Jon Porter writing in The Verge suggests that Williot's chip can be produced cheaply and mounted on anything solid. Used in a smart building, chips like Williot's could augment the sensor units currently being used to bring a whole new level of precision to monitoring a home.

Making a home smart with Bluetooth

Energy harvesting technology may not have been ready for 13 Salinas Street but when Adam and Cathy decide to set up their own business in a couple of years, it will be used in the office building they have refurbished. Like the Bluetooth Mesh that keeps 13 Salinas Street attentive to their needs, they will be able to forget about how it works and simply enjoy the convenience and energy savings it brings them.

If you'd like to know more about Bluetooth in smart homes or how Atamate uses it, please ask us on the form or download our whitepaper for more information.