Bluetooth 3: Why Bluetooth Microwaves Are No Threat to Your Health.

While extensive research has revealed no ill effects from the powerful microwave signals produced by mobile phones, we recognise that you might have experienced doubts about the safety of microwaves in the past and thought it would be both interesting and helpful to put those concerns to bed.

In this article, we look closer at the relationship between Bluetooth microwaves and your health - and explain exactly why they’re no threat. 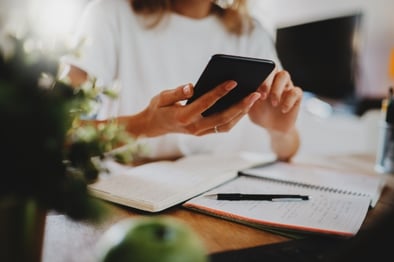 Where did the link between electromagnetic microwaves and your health start?

The question of whether it's safe to hang around microwaves has been around for as long as engineers have been focusing them. The US Navy was concerned enough to commission a 1971 report containing a five-page list of the nasty things they worried microwaves might be doing to their personnel. However, their people were working with radar and communication systems so powerful that they were feeling physically heated by them in the same way that a microwave oven heats a meal. It's not unreasonable to worry about your health when you're being cooked, but the phones we carry in our pockets are nowhere near that powerful and the wireless signals a smart building uses are weaker still.

For most of us, cooking the lazy way was the only way we encountered devices generating microwaves until the late 1990s. That was when the mobile phone started its transformation from expensive novelty to the ubiquitous accessory we all carry with us in our pockets today.

As mobile phones proliferated, so did signs banning their use in certain areas. We were warned that they might do anything from interfering with hospital equipment to causing fuel stations to explode while we filled our cars. Alongside those more immediate concerns was the worry that carrying a microwave transmitter in a pocket or handbag might cause cancer. No evidence surfaced to prove the link and we'd just about got comfortable with the idea that being constantly on call wasn't likely to kill us when the International Agency for Research on Cancer (IARC) classified microwaves as 'possibly carcinogenic to humans' in 2011.

Contrary to the way it was reported at the time, IARC did not mean they'd found proof that phones cause cancer. The bar for being placed on IARC's Group 2B list of possible carcinogens is very low and the list is very long. Microwaves fall into the same category as aloe vera leaf extract, carpentry and dry cleaning.

How did microwaves find themselves on that list? Read our article to find out more.

What is a microwave?

A microwave is one of many types of electromagnetic waves carried by photons. To fully describe a photon, we'd have to resort to quantum physics, which tells us that photons are very strange beasts indeed. A photon pulls off the trick of being both a particle and an energy wave at the same time, and does all sorts of weird things like what Einstein called 'spooky action at a distance' before a committee killed his poetry and renamed it 'quantum entanglement'.

As we're talking about what they do in smart buildings, a useful working definition is that a photon is a high-speed messenger that carries information from one device into another and occasionally bumps into someone who gets in the way. We've talked about why Atamate uses Bluetooth to send and receive our photons, but here we're going to focus on what happens when they bump into that someone.

Keeping with our working definition, the two things we need to worry about are the wavelength our photons are travelling at and the power density with which they are hitting us:

When we're talking about how an electromagnetic wave might affect us, the size of the object it can interact with is what's important so we'll be considering the wavelength rather than the frequency.

At the low-energy end of the spectrum, wavelengths can be measured in thousands of kilometres but the lowest energy waves we use for communication are the radio waves detected by FM radios, which have a wavelength of a few metres. The long-wavelength is the reason old-fashioned radios have such long aerials: they go straight through most things so they need a decent-sized piece of metal to catch them.

At the high-energy end of the spectrum are the gamma rays emitted when atoms are split in a nuclear reactor. Their wavelengths are so short that they can knock an electron off an individual atom. That's good news if we want to use them as a power source because they transfer their energy to water, boiling it to drive a steam turbine. It's not such good news if we're anywhere near them because they interact with the cells of our bodies to cause radiation sickness and cancer. 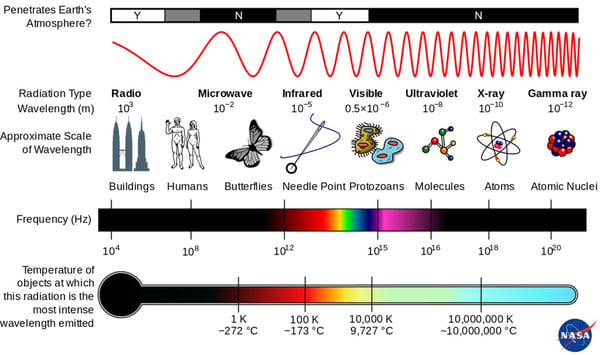 In between the benign radio waves and the lethal gamma rays lies the visible spectrum: a narrow band of wavelengths that we can see because they interact with the pigments in our eyes. Slightly lower down the energy spectrum from what we can see is infra-red, which we can't see but can feel as heat. We don't need radio transmitters, nuclear power stations or even a light bulb to emit electromagnetic waves. We're emitting infra-red photons ourselves in the form of our body heat. Any time we get close enough to someone to feel their warmth, what we're really feeling is them blasting us with their own electromagnetic waves.

Moving further down the energy gradient again, the microwave part of the spectrum covers anything that carries less energy than infra-red but more than radio waves, with Bluetooth using a slightly shorter wavelength than mobile phones. Microwaves are a long way from the short wavelengths that are associated with known health problems. The colour of drying paint - and indeed any colour that we can actually see - and the warmth of the last person we hugged are both carried by electromagnetic waves with wavelengths closer to those nasty gamma rays than those produced by Bluetooth devices or phones.

But it's not just about the wavelength.

Power density is a measure of how many photons are hitting a surface. That's something we understand intuitively: that last person we hugged might have felt pleasantly warm but that's not a good reason to put our hands too close to an open fire. Our hugging partner and the fire are both emitting photons in the infra-red part of the spectrum, but the fire hurts because it's emitting a lot more of them.

The power density is affected by how many photons something is throwing out and also how close to it we are. That fire produces a lot of infrared energy but it only hurts if you get too close to it. You could get as close as you like to the last person you hugged because they weren't broadcasting too much infra-red in the first place.

To put Bluetooth into that context, the human body emits around 100W in the infrared part of the spectrum. A mobile phone's output is much lower at 0.6-3.0W in the longer microwave part of the spectrum. Atamate's Bluetooth devices are lower again at around 0.3-0.4W - a slightly shorter wavelength than phones but much longer than the human body. To put it another way, you are outputting more than ten times more electromagnetic energy as your phone.

Those figures measure how much power is being broadcast, but power density is how much of it is hitting a given area of a surface. That's measured in watts per square metre (W/m2).

Microwaves can heat a surface if they hit it with a high enough power density. An engineer called Percy Spencer found that out while he was working for Raytheon: the radar equipment he was working on melted a bar of chocolate in his pocket, which inspired him to invent the microwave oven. If we're putting phones in our pockets and bringing Bluetooth into our homes, we'd really rather they didn't melt our chocolate and we certainly don’t want them to do anything to us.

We need to know what the safety limits are.

How much is too much?

To ask what is a safe power density of microwaves is to ask how many photons can hit a surface without affecting it when that surface is our own skin. The surface area of most adults is between 1.0m2 and 3.0m2. Children, being smaller, scoop up fewer photons than adults.

Two organisations have convened committees to come up with standards that are widely recognised around the world:

The International Commission on Non-Ionizing Radiation Protection (ICNIRP), recognised as the leading international body by United Nations agencies like the World Health Organisation (WHO) and the International Labour Organization (ILO), came up with the maximum safe limit of 10W/m2 in 1998 and confirmed it after a reassessment in 2009.

In 2019, the USA's Institute of Electrical and Electronics Engineers (IEEE) convened their own committee who settled on a higher safe limit of 20W/m2.

Both figures are massively higher than anything that we're likely to encounter in a smart building with Bluetooth microwaves transmitting at less than 0.4W. Even though a building has a lot of Bluetooth nodes, they're not all transmitting all of the time. One advantage of the mesh protocol, in which the various nodes relay each other's messages across the network, is that it allows most of them to transmit well below their maximum power level. They only need to send information to the nearest node rather than with their message's final destination, which might be at the other end of the building.

While we don’t have data on the power density inside a Bluetooth-equipped smart building, very few technologies have been introduced into the home with as much safety data as wireless communication. In recent years, a great deal of research has been carried out using the average microwave levels we're exposed to every day as a baseline - a measurement that adds up to much more than you're likely to get from a smart home full of Bluetooth devices.

Most of the work on everyday microwave exposure has focused on microwaves produced by phones, which emit photons at a slightly longer wavelength and higher power than Bluetooth devices. As the wavelengths used by phones and Bluetooth sit next to each other on the microwave part of the spectrum, it's reasonable to also apply the conclusions to Bluetooth.

Those conclusions are straightforward: don't shut yourself in your microwave oven and you'll be fine. All the evidence is that microwaves have no effect on us at the power density that phones and Bluetooth devices produce them.

Read more about Bluetooth is the other articles in this series;

If you'd like to know more about Bluetooth in smart homes and how Atamate uses it, please ask us on this form or download our whitepaper on services in eco homes.