Atamate has chosen Bluetooth Mesh as its wireless protocol for our next generation of products. Bluetooth Mesh connects the sensors and services that make a building smart into an internet of things, communicating on a frequency that is free in all countries. The mesh allows every Bluetooth node to relay messages as well as to send and receive them, minimising the system's power requirement. 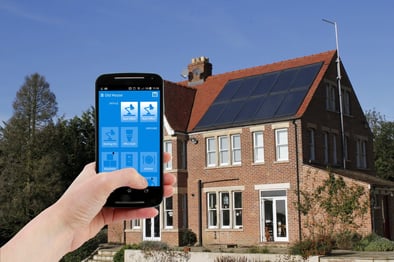 In 958, King Harald Bluetooth began a thirty-year reign that lived up to everything we might expect from a Viking warlord: he united the tribes of Denmark into a single kingdom, he conquered large tracts of what's now Norway and Germany, and he died battling against a rebellion led by his own son, Sven Forkbeard.

In 1997, Harald Bluetooth's name was adopted by a group of engineers who were far more interested in inventing things than in conquering anything. They had started out trying to come up with a wireless protocol that integrated Ericsson phones with IBM ThinkPads (a product line since taken over by Lenovo), and chosen King Harald's name because they intended it to unite different manufacturers' devices as successfully, if rather less violently, as Harald united Denmark. For good measure, they also adopted Harald Bluetooth's initials in the runic alphabet to form a logo.

In 2019, Atamate Building Intelligence selected Bluetooth as the wireless protocol for our next generation of smart building technologies.

One reason the Bluetooth designers chose that wavelength is that it is unregulated in all countries, which makes it easy to export Bluetooth-based systems. The technology is managed by the Bluetooth Special Interest Group, which sets the protocol but places no restrictions on who can use it and how.

“Technology firms such as ours are free to adapt it for our own purposes while ensuring that the technology is entirely under the control of us and our customers.”

In a smart building, every sensor, service and interface is a node that uses the Bluetooth network for two-way communication with the hub. The mesh standard takes that a step further by allowing each node to relay messages between other nodes, enabling the hub to communicate over long distances with low-power signals.

A smart building with a sensor and services in every room offers many possible pathways for a message to travel between the hub and the sensors, services and interfaces in the building. The mesh protocol gives the system the flexibility to vary the pathway if necessary, so a message can find its way around a permanent blockage - like a thick wall - and it can also change its route if a temporary blockage, like interference from some of the older types of electric motor, appears from time to time.

The same flexibility avoids single points of failure: if a node in the network fails, the mesh will route messages around it and send an alert to the interface to say that something needs fixing.

Discover more about Atamate’s ceiling sensor units and how they connect with Bluetooth.

When we made the decision to develop a wireless version of our smart building technology, we looked into the various protocols available and settled on Bluetooth for a number of reasons:

Technical considerations aside, we're willing to admit to liking the name. Not only is it hard not to like a system named after a Viking, but Harald Bluetooth was the grandfather of one of the greatest kings of medieval Europe: Canute the Great. Canute ruled over much of Britain as well as Harald Bluetooth's lands in Scandinavia and, contrary to tall tales invented long after his death, was never silly enough to try to hold back a rising tide.

We do recognise that impressive as Harald and his descendants were, they probably made very bad house guests. The Bluetooth system, by contrast, is something you can bring into your home and forget that it's there.

This post is part of a series on making a building smart with Bluetooth technology, the other articles can be found through this links

If you'd like to know more about Bluetooth in smart homes or how Atamate uses it, please ask us on the form or download our whitepaper for more information.