The Atamate building operating system (atBOS) can control a building’s services to mitigate overheating. As required by Part O of the UK building regulations, it can prioritise passive cooling by opening windows and dynamic shading but if necessary, it can operate mechanical ventilation and cooling as efficiently as possible. 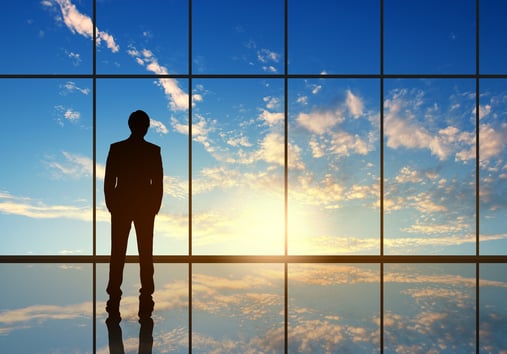 A companion article described how atBOS collects data to assess whether a building has an overheating problem and if necessary, to inform mitigation measures both for the wellbeing of its occupants in compliance with Part O of the UK building regulations which we have described elsewhere.

Here we describe how atBOS can go beyond describing the problem to solving it by controlling the relevant building services. As required by Part O, atBOS prioritises passive cooling but if mechanical systems are needed, it can use occupancy control to only cool rooms where the building occupants will benefit from the energy expenditure.

The simplest way to cool a building is to open the windows and Part O’s simplified method of mitigating overheating is based on cross ventilating rooms by opening windows on opposite facades. However, depending on manual window opening has the same problem as any other manual measure to control an indoor environment: someone who lives in a building usually has more pressing priorities and only thinks of doing something when they’re already uncomfortable. 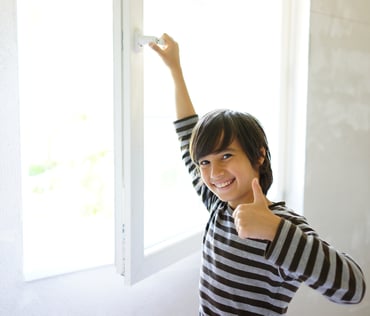 Valentina Fabi of Politecnico di Torino led a review that showed that most of us open them when we get uncomfortably hot and close them when we get uncomfortably cold, setting the indoor environment constantly fluctuating between uncomfortable temperatures. An impact on comfort may also impact energy expenditure. A common problem is that windows are often opened when the heating or air conditioning is still switched on. Windowframe switches enable atBOS to detect when a window is open and switch off any heating or cooling devices in the room.

However, the limitations of depending on occupants to open and close windows can be more profound than that. Part O’s methods depend on purge and cross-ventilation which are familiar to building designers but rarely to the people who occupy the homes they design. Part O’s dynamic modelling method assumes windows will be opened and closed at certain temperatures but once again, that assumes that monitoring the temperature and operating the windows accordingly will be at the front of the mind of an occupant who may be concerned about feeding the kids or bingeing their Netflix boxset.

When windows are left to the occupants, the temperature will only ever settle at a comfortable level through a coincidence of weather and building physics.

Automating the windows and placing them under atBOS control resolves the problem because once the occupants have set their preferred comfort temperature, atBOS controls the windows to deliver it. Motorised windows have other features that may be beneficial in certain situations:

Other approaches may be preferable in different situations but the salient point is that automation based on continuous monitoring of the indoor environment simultaneously delivers comfort, convenience and energy efficiency.

One way to avoid the need for cooling is to prevent a building from heating up in the first place by limiting solar gains. One solution suggested by Part O is windows made of solar control glass. Such ‘low-g’ glass, so-called because it has a low g-value (ratio of internal heat gain to incident solar radiation), certainly limits solar gains but has several potential disadvantages:

An alternative approach to external shading is to use overhangs or a brise-soleil which shade windows during the summer but allow direct sunlight during the winter when the sun is lower in the sky.

In Mediterranean architecture, external shutters are often used to limit solar gains. Shutters that can be opened or closed manually are a type of dynamic shading because they can be adjusted in response to the position of the sun and the intensity of sunlight.

However, manually operated shutters share the problem of manually operated windows, in that we only manually operate them when we are already uncomfortable. Nor would Mediterranean-style wooden shutters be practical in modern British buildings, which tend to have much larger windows to make the most of the lower light levels. However, automation enables two possible ways to apply dynamic shading:

The potential for solar gains is at its highest during the day when a residential building is often empty. Automating the shading allows atBOS to prevent the building from heating up when it is unoccupied. When the occupants are at home, atBOS can open the shading in occupied rooms to maximise the daylight that they experience.

While atBOS is designed to maximise the contribution of passive cooling, some buildings still require mechanical cooling systems that require electrical energy. While atBOS can operate any system, most fall into one of three categories:

Whatever system is installed, atBOS will always use passive cooling systems first and only use the mechanical system if it proves inadequate to prevent an occupied room from overheating.

As our two-part series has described, atBOS can be used in three different stages of a building project to mitigate overheating:

At atBOS, we have regarded mitigation of overheating as a design priority for some time so we are gratified to see that it has now been written into regulation.

If you’d like to know more about how Atamate can help to mitigate overheating in buildings, ask us on the form and we'll be happy to discuss it.