What's the link between elderly care and technology?

The relationship between technology and loneliness is one that has been increasingly examined in recent years, with the digitalisation of more and more aspects of daily life, such as supermarket checkouts. The increasing influence of social media (and all the pressures that come with it) also has a significant impact on the human interactions experienced - or not - by the average person during the day.

But technology doesn’t have to be a scary or isolating thing. It can facilitate rather than complicate daily life. On a large scale, smart control technology in your home can manage your heating, lights and ventilation, with every system working in tandem to save energy and make the efficiency of your home automatic. These smart homes can keep track of visitors and ensure that social contact is made. On a smaller scale, devices such as tablets or smartphones can increase connectivity and improve communication.

Elderly care and loneliness: what effects can it have?

Loneliness is ‘a subjective feeling about the gap between a person’s desired levels of social contact and their actual level of social contact’, whilst social isolation is defined by Age UK as ‘an objective measure of the number of contacts that people have’. 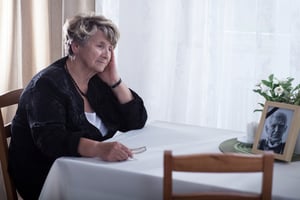 The Campaign to End Loneliness cites a review conducted by Julianne Holt-Lunstad on social relationship and mortality risk, stating that loneliness increases the likelihood of mortality by 26% and has an effect on mortality comparable to factors such as obesity. The NHS website points out that loneliness can also lead to depression.

A clear indication of the scale of the problem is the fact that early this year the British government appointed Tracey Crouch as the minister of loneliness.

In the elderly this issue is even more prominent. A survey carried out for the Jo Cox Commission found that almost three-quarters of older people in the UK are lonely. However, there are ways to combat this potentially deadly problem, and one of those ways is to use technology. Here are four means of using technology to reduce rather than increase loneliness.

Smart controls already have manifold uses in homes for the elderly, particularly in relation to safety, security and comfort. However, they can also be used to minimise loneliness and social isolation.

The use of PIN codes to enter the house permits the recording of who has visited and when. If there haven’t been any visitors for the whole day, a text message can be sent to a relative or carer, suggesting that they give the elderly person a call, or pop in for a chat.

This system can also be used to monitor the visits of carers or services such as Meals on Wheels, helping a concerned relative achieve peace of mind and ensuring that the occupant is experiencing enough human contact every day.

Services such as Skype provide a much more immersive experience than a phone call for the elderly, facilitating communication between families and friends no matter the distance.

The Office for National Statistics found that:

These statistics suggest that the likelihood of more elderly people connecting with others through video calls could increase in the future. 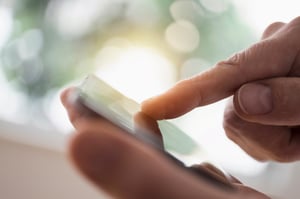 In 2017, Ofcom found that ‘record numbers of older people are embracing smart and social technology’. Their findings included figures which revealed that half of internet users aged 65-74 have a social media profile and four in ten (39%) use a smartphone.

Just like video calls, social media can be a source of contact and communication for the elderly. On sites such as Facebook it’s possible to view photos of family members, or join groups of people who share your hobbies and interests.

Tablets are becoming increasingly popular amongst the elderly. In the same survey, Ofcom found that a quarter of over-75s are using tablet computers. With a tablet, an elderly person can use a variety of different apps to stay connected, whether it’s playing Words With Friends with a grandchild or challenging a friend to a game of Scrabble. Apps such as Crosswords Classic or Sudoku further keep the mind active.

In addition, there are the apps which make online communication possible, such as Facetime or Gmail. Touch-screen tablets render the usage of these apps easier and more intuitive.

From these examples, it’s clear that technology doesn’t have to be a barrier between older and younger generations. Instead of being exclusionary and causing loneliness, it can in fact bring together families and allow them to communicate. There is also now the potential for technology to unite elderly people with each other, through the use of social media and other apps such as word games. Best of all, smart control technology can work to monitor the visits an elderly person receives and alert those concerned that a chat or a drop by is in order, ensuring that human contact is maintained to prevent social isolation and loneliness.

Please find here a case study where we are working with people with dementia to use technology to keep people in their own homes as long as possible;

If you have any further questions, please fill in the form below or book in for a chat with one of our expert consultants;