Is MVHR appropriate for the British climate ?

However, it is expensive to install and case studies found many systems are incorrectly designed and operated. In the mild British climate, there are cheaper and more efficient options.

The Atamate view of MVHR

Our view is that while MVHR may be appropriate for some of the colder parts of Britain, there are more cost-effective options available for most of the country. For instance, we have shown that occupancy-controlled electrical heaters deliver better efficiency than MVHR in Cardiff, which has a climate typical of England, Wales and much of Scotland.

The buildings in our case study did use heat pumps in the ventilation exhausts but rather than using recovered heat energy to heat the incoming air, they used it to heat the hot water supply. Systems like the Ecocent boiler integrate the ventilation system with water heating, which usually needs more energy than space heating in a well-insulated building. Unlike space heating, which is only needed at the colder times of the year, hot water is needed all year round.

We accept that MVHR may be the best option in some of the colder parts of the British Isles but unless it is designed and installed properly, the result is an expensive building constructed around an MVHR system that delivers neither the comfort nor the energy efficiency that a cheaper and simpler design might have done.

Even a correctly installed MVHR system requires more attention to their operation and maintenance than most of us give to running our homes.  At Atamate, our view is that placing MVHR under a control system such as ours enable an MVHR system to deliver the highest energy efficiency it is capable of without demanding the attention of people who see their home as a place to be lived in rather than continually managed. 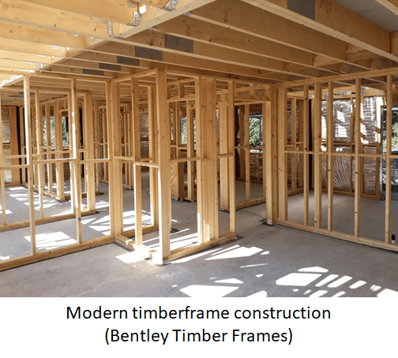 Limiting air leakage through building fabric is such a key element in designing an energy-efficient building that it is part of the standard assessment procedure (SAP) for testing the energy performance of new or renovated homes. The current standard states that once a building is pressurised to 50Pa, no more than 10m3 of air should leak out of the building for every square metre of floorspace per hour - usually expressed as 10m3/m2/hr. The Future Homes consultation, intended to impose high efficiency standards on British homebuilding, proposes an updated SAP with the higher standard of 8m3/m2/hr.

The UK standard is high enough to limit heat loss although it does not try to prevent all air leakage. A law of diminishing returns that dictates that the closer a building design is to being completely airtight, the more it costs to plug the remaining leaks.

For a building with MVHR, those leaks represent a double inefficiency because not only do they carry heat energy out of the building, but they deny it to the MVHR's heat exchanger. It's usually recommended that for MVHR to operate efficiently, air leakage must be limited to 4m3/m2/hr which requires a very high quality of building fabric and imposes high capital costs.

The combination of MVHR and highly efficient building fabric is central to meeting the very high heating efficiency required to meet the Passivhaus standard for new buildings and the related EnerPHit standard that may be applied to renovated buildings.

To meet the Passivhaus standard, space heating demand must be below 15kwh/m2/yr. A similar standard of 15-20kwh/m2/yr was suggested by the UK government's Committee for Climate Change (CCC) in their UK Housing: Fit for the Future document, accompanied by some rather bold statements about the central role of MVHR in meeting their recommendations:

However, the Passivhaus standard was developed in Germany, where winters tend to be longer and colder than in much of the UK. Paola Sassi of Oxford Brooks University found that in the milder climate that dominates the parts of the UK where most of the population live, not only could Passivhaus standards of energy consumption be achieved without incorporating MVHR but building around MVHR actually led to poorer energy performance:

While the Passivhaus model is a robust model for ultra-low energy building in cold continental climates, the post-occupancy evaluation of a building in the mild southern UK climate designed to Passivhaus standards was shown to perform more efficiently and without compromising comfort without MVHR.

In UK Housing, the CCC do not address the construction costs needed for MVHR to be efficient, but the Passivhaus Trust estimates that the efficiency of their standard comes at capital costs 20-25% higher [PDF] than in a building insulated to the lower standard required by UK building regulations.

Sassi's study only compared two houses in Cardiff, but several larger studies assessed the performance of larger numbers of homes fitted with MVHR. Studies commissioned by the Zero Carbon Hub and Innovate UK have been carried out in Britain while another study was conducted by the Dutch Ministry of Housing, comparing mechanical ventilation systems with and without MVHR in the Netherlands which has a similar climate to Britain. 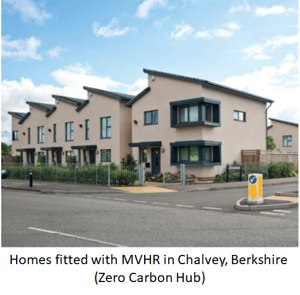 All three studies found that MVHR rarely lives up to the potential suggested by the CCC. Many homes fitted with them had consistently poor indoor air quality and were prone to overheating.

Given that the main reason for installing an MVHR is to cut the energy costs of heating a home, it's particularly relevant that the Innovate UK study confirmed Sassi's prediction that MVHR does not deliver particularly good energy efficiency. The installations they considered delivered an average energy consumption of 40kwh/m2/yr, falling well short of the CCC's 15-20kwh/m2/yr target.

While the case studies do not support the CCC's view that MVHR is the key to achieving their target, our case study showed the target is achievable with a less complex and more affordable approach. We fitted rented flats with electrical heaters optimised for efficiency by occupancy-based control delivered space heating at less than 12.5 kwh/m2/yr, meeting the standards set by both CCC and Passivhaus. The flats used for the case study met the fabric standards of the proposed update to the SAP as well as those mandated by the current building standards, but not the 4m3/m2/hr that would have been needed for an MVHR system.

Arguably, none of the three case studies tested MVHR's potential fairly because few of the systems they assessed had been correctly installed in the first place and very few were correctly operated.

In the Dutch study, over 75% of the rooms tested did not have a high enough exhaust rate to ventilate the room properly. Worse, the MVHR systems were often installed with the inlet vent that so close to the exhaust that the exhaust air was being drawn back in, providing incoming air of lower quality than the outdoor air available a mere couple of metres from the inlet.

A further problem was the noise and vibration of air moving through the ducts. Because MVHR requires nearly all the air coming in and out of the building to pass through it, it imposes a need for the ducts to handle high volumes of air. Some of the buildings needed wider ducts to allow enough ventilation at airspeeds low enough to be silent.

As well as having been poorly installed, the Dutch study found that only 4% of the systems were being operated as recommended by the manufacturer. Among the other 96%, the researchers traced some problems back to installation problems such as controls being difficult to access. In others, the 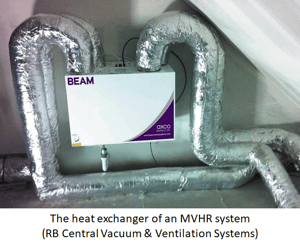 residents simply didn't know how the systems were supposed to be operated. Whatever the reason for the poor operation, neither the air quality nor the energy efficiency were what they could have been.

The problem of poor installation suggests its own solution: expanding the building regulations to include design and installation standards for MVHR. The UK's building regulations currently set out specific requirements for most types of building services but the poor installations reported by the Zero Carbon Hub and Innovate UK studies show that MVHR falls into a gap between Part F that deals with ventilation and Part L that deals with most aspects of heating energy efficiency.

The case studies demonstrate that a system as complex as MVHR requires careful design and skilled installation to perform well and in the absence of design guidelines and performance standards, buildings end up being designed around MVHR-equipped ventilation systems that deliver neither good ventilation nor efficient heating.

The problem of systems not being used properly is likely to require a different solution. Mandating a commissioning process that involves training residents may help but commissioning can only involve the first owner or resident to use a system. It cannot be assumed that the instructions given during commissioning will be passed on every time a home changes hands during a lifespan that may last for decades.

In the Innovate UK study, many of the homes were council houses or housing associations in which tenants were not as engaged with the operation of the systems as a homeowner might be. It's easy to forget to change a filter when it only needs doing once a year and when the system seems to be working fine, it's hard to see the point of splashing out £100 on new filters. If clogged grilles were forcing the fan to run for longer and consume more electricity, the loss of efficiency happened gradually enough that no one noticed.

For someone who is used to their home's services needing little more than setting a thermostat or opening and closing a window, the operation and maintenance requirements of MVHR may be daunting or simply easy to forget about.

Maximising the potential of MVHR

The case studies also show that an MVHR system requires more involvement from the people who live in the home it is recovering heat into than a conventional heating system, both to regulate the heating and to perform maintenance tasks like cleaning and changing grilles.

Our view is inevitably coloured by the fact that building controls are our core product but when the authors of the Innovate UK study concluded that 'it is clear that MVHR are not fit-and-forget systems', 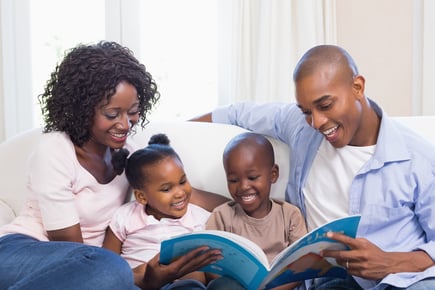 we make no apology for seeing building controls as the solution to the problem of residents not prioritising the optimal running of their MVHR.

If you are reading this on a screen, the solution is literally staring you in the face. The operating system of a modern computer, tablet or phone runs in the background without needing any input from us. If it does need us to do something, it sends a message stating what is required.

Similarly, placing MVHR under a building control system would ensure that its operation is constantly optimised around the indoor air quality, internal temperature and external temperature without needing input from the users. When a filter needs changing, a control system can send a message to the user along with a breakdown of how much it would save on the electricity bills, simultaneously saving the residents from having to remember when to change the filters and giving them a financial incentive to do so.