The modern urban environment is ideal for the transmission of respiratory viruses, which is why the common cold spreads so fast. COVID-19 spreads using the same mechanisms but is far more serious because it can cause pneumonia and long-term illnesses. Developing ways to limit the spread of viruses in the built environment will require an understanding of how they infect. 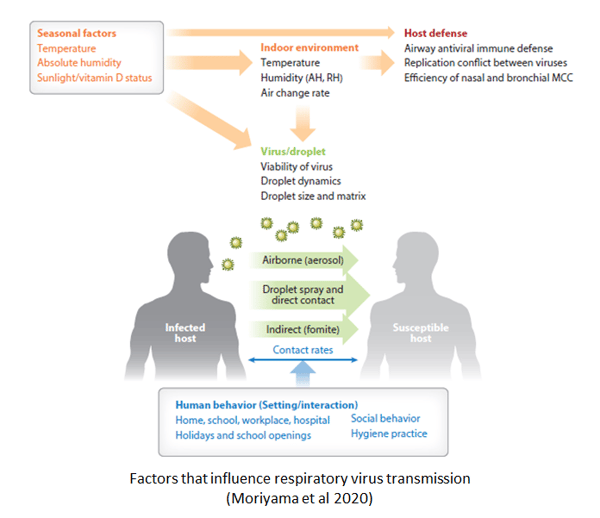 If civilisation has a single defining feature, it is the toilet. The first known toilets date back 6,000 years to the first known cities in Mesopotamia and it's unlikely that those cities could have formed at all until someone invented sanitation. Diseases like typhus and cholera would have torn through the population and the survivors would have decided that it was a bad idea to cluster together with so many other people.

As our cities expanded and our buildings reached up to scrape the sky, our sanitation systems expanded with them. We can now live or work hundreds of metres above the ground and take it for granted that we can wash our hands with warm water whenever we need to.

The practical consequence of a system that pumps warm water into bathrooms above the clouds is that we never have to spare a thought for cholera, typhus or any other water-borne disease. Most of us only bother to get vaccinated against them if we're going to work in a disaster zone where the sanitation system has broken down.

Civil engineering has triumphed over water-borne diseases but as anyone working in an open-plan office when there is a cold going around can attest, it's also built an urban environment that's a breeding ground for airborne infections. By enabling so many of us to live and work within breathing distance of each other, sanitation has enabled us to turn ourselves into a human farm for respiratory viruses to thrive on.

The 20th century saw one type of respiratory virus, influenza, cause pandemics in 1918, 1957 and 1968 that killed millions of people around the world. Since the 1968 'Hong Kong flu', we've had half a century without a pandemic in which we've come to see respiratory viruses as synonymous with the common cold: an annoyance we can live with rather than a serious health hazard.

In an earlier article, we discussed how the common cold is more damaging to our health and our finances than we tend to give it credit for but it wasn't until this year that we faced the true cost of complacency. Because we never bothered to close the door to the common cold, we left it open to a pandemic.

To understand why the modern urban environment is so friendly to respiratory viruses, we need to understand what a virus is: a piece of rogue genetic material that hijacks our cells to reproduce itself.

As soon as it starts reproducing, our body's immune response kicks in and usually clears the virus within a week or two. That gives it a very narrow window of time to infect someone else. To pass from one person to another, the virus builds a capsid of proteins around itself. The pictures of viruses that accompany daily news reports on COVID-19 are usually of that capsid, but it's misleading to equate the capsid with the virus. The capsid is simply a vehicle to carry the genetic material from one host to another.

A virus enclosed in a capsid is completely inert, which makes it fragile. Life is a process of constant repair and renewal, needed because the air is full of corrosive compounds and background radiation from the sun. A virus outside its host can't repair or renew itself. All it can do is float around until it either encounters a new host or, more likely, the genetic material is damaged beyond being able to infect anything. A virus in the outside world rarely has more than a few hours to find someone else to infect.

With every breath, the average person takes in 400-500ml of air. We pass several litres of air through our nose throat and sinuses every minute, offering an easy way in to any virus suspended in that air.

Most respiratory viruses don't get further than our upper respiratory tract: the nose, sinuses and throat, which are lined with cells that a virus can attach to. Once it's inside those cells, it can replicate into a batch of capsid-encased progeny.

We breathe the virus's progeny out in the tiny droplets of water that we exhale. The droplets are small enough that they stay suspended in the air for some time, forming aerosols that give someone else a chance to breathe them in. If the droplets settle on a surface, they can linger there until someone touches that surface. If that person then touches their nose or their mouth, the virus finds its way in.

A virus in the air or on a surface is fragile. They rarely last more than a few hours, although they may last for a few days if they settle on a surface.

We don't know we've been infected in those early days, so we're still living our life as usual which often means walking around and breathing virus-laden droplets where other people can breathe them in.

Once the immune system is activated, we're likely to have mixed feelings about the process. On the one hand, it stops the virus spreading any further and one thing we've learned from COVID-19 is that it's very bad news when a respiratory virus reaches our lungs.

On the other, the immune response involves an inflammation of the upper respiratory tract that can leave us thoroughly miserable. It's what we call the common cold.

It only takes the immune response a few days to clear out most cold viruses, after which it gears down and allows us to feel human again. The immune system learns as it goes, retaining a memory of most of the viruses it has encountered in the past so they can't infect us again.

The keyword there is 'most' as some viruses disrupt the formation of long-term memory so they can infect again within a few years. The masters of that particular trick are the coronavirus family and while it's too early to know if the COVID-19 virus shares the family trait, there is a good chance that it will be able to reinfect people who have already had it once.

There are colds, there's flu and there's COVID-19

We tend to call a particularly nasty cold the 'flu', short for influenza, although it's not possible to distinguish the virus causing the illness by the symptoms. Influenza is the most likely of the 200 cold viruses to put us in hospital but among the viruses that leave us curled up with a Lemsip, influenza isn’t necessarily nastier than any of the other cold viruses.

In practice, we use the traditional definition: if it's bad enough that we're taking time off work, it’s the flu. If we're still dragging ourselves in, it's only a cold.

The COVID-19 virus has a few things in common with the cold and flu viruses but it's far nastier than any of them.

At the time of writing, the best estimate is that it kills between one in every 100-200 people who it infected. For comparison, that makes it between twice and five times as deadly as the World Health Organisation estimates [PDF] of less than one death per 500 infections for the 1957 and 1968 influenza pandemics. The Spanish influenza of 1918 did have a higher fatality rate of over one in 50, but that may not mean the virus itself was more deadly; many people who died of Spanish influenza would have survived if they'd been treated by a modern hospital.

COVID-19 is vastly more deadly than the 'seasonal' flu that gives us a cold every winter, which kills around one person in every 1,000 who becomes ill with it. In fact, the difference between COVID-19 and seasonal influenza is greater than the tenfold difference implied by those figures as the figure for COVID-19 counts everyone who was infected whether or not the became ill while the figure for seasonal influenza disregards the many people who never became ill.

As to what makes it so much nastier, two reasons have been identified to date. The first is that while it infects us by copying the common cold's trick of sneaking into the upper respiratory tract while we breathe, it often manages to spread down to the lungs before the immune system kicks in to stop it. As unpleasant as a cold might be, inflammation of the upper respiratory tract is not particularly dangerous. Inflammation of the lungs, or pneumonia to use the clinical term, is an entirely different matter because it can stop us from being able to breathe.

COVID-19's other trick is even more insidious and is still far from being fully understood. At the time of writing, it appears that COVID-19 interferes with the gearing down of the immune response once the virus has been cleared. The more severe cases of COVID-19 appear to involve the immune response failing to shut down so that the illness persists long after the virus has been cleared.

The mechanism behind that is probably related to what is sometimes called 'long-haul COVID', a prolonged and debilitating disease that affects people who have been infected, many of who were not ill enough to be admitted to hospital. At the time of writing, there are more questions than answers about long-haul COVID. We don't know how common it is, how long it lasts or who is most likely to get it although the Post-hospitalisation COVID-19 study (PHOSP-COVID) study in the UK is trying to get some answers.

The dearth of facts around long-haul COVID is only one of many major knowledge gaps around COVID-19. What is known for sure is that it's very infectious, it's very serious for many of the people who get it and contrary to a lot of what is still being said in the media, it's very different to the poorly defined entity that is the 'flu'.

The next post in the series will discuss the reasons why we catch more colds in the winter.