We tend to design our buildings around aesthetics and function but it's easy to forget that they won’t only be accommodating us. They'll also be accommodating a host of microbes that impact our health. It's a subject that preoccupies Kevin van den Wymelenberg at the University of Oregon, who sums up the issue in a short video:

Van den Wymelenberg is not the first to argue that health should be a defining factor in architecture and there is a history of respiratory infections influencing building design. The rise of modernist architecture in the early 20th century, pioneered by Le Corbusier in France and the Bauhaus movement in Germany, was heavily influenced by fear of tuberculosis.

Tuberculosis is a bacterium rather than a virus but from the perspective of building design and management, it presents a similar problem: it infects the respiratory system and is transmitted by aerosols and surfaces. It was so feared that it was called the 'White Plague', partly because of the characteristic pallor of tuberculosis patients and partly to reflect its equivalence with the Black Death. Like respiratory viruses, tuberculosis could cause recurrent mild or severe illness or it could be fatal. Sharing the built environment with tuberculosis wasn't very different from sharing it with influenza and COVID-19. 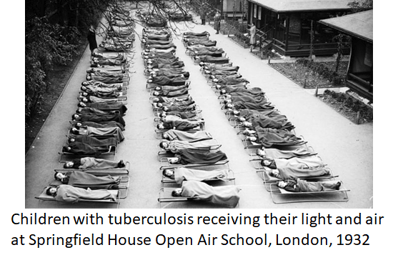 The modernists were heavily influenced by the design of the sanatoria where tuberculosis patients were sent to recover. The guiding principles of sanatoria were summed up in the dictum Licht und Luft: German for 'light and air'. When we consider their approach in the context of what we now know about tuberculosis and respiratory viruses, it looks like they were on to something.

The Licht referred to both light inside buildings, which the modernists encouraged with large windows and walls painted in light colours, and also with flat roofs or balconies for what was then called heliotherapy and is now called sunbathing. The modernists understood that well-lit interiors promote wellbeing, which is a principle written into the Chartered Institute of Building Service Engineers' (CIBSE) 2020 memorandum on health and wellbeing (TM40) which we have summarised in an earlier article. 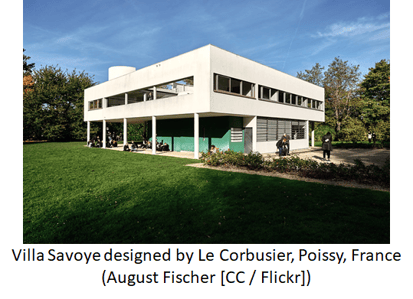 What the modernists didn't understand was that, as the saying goes, light can be a great disinfectant. At the time, the importance of aerosols and surfaces in transmitting infections was not understood and it was thought that diseases were transmitted by direct contact between one person and another. The modernists couldn't know that sunlight kills viruses.

A recent study led by Michael Schuit of the US Department of Homeland Security's National Biodefense Analysis and Countermeasures Center showed that while the influenza virus has a half-life of 32min in the dark, sunlight cut its half-life to a mere 2.4min.

However, it's only the ultraviolet wavelengths of sunlight that damages viruses and bacteria and ultraviolet cannot penetrate glass. The huge windows favoured by Le Corbusier ticked CIBSE's boxes for wellbeing but they kept sunlight from disinfecting his homes as effectively as if they'd been brick walls.

The discovery that viruses can be transmitted through the air was made by the husband and wife team of WF and MW Wells, who conducted a series of experiments in schools in Philadelphia between 1937 and 1941. They fitted classrooms with ultraviolet lamps that irradiated the air in the upper part of the rooms. 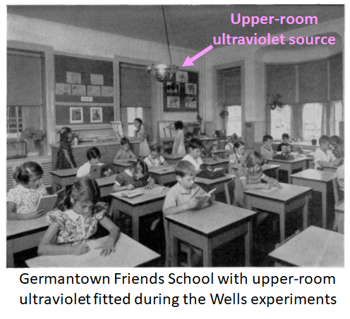 At the time, it was widely believed that viruses could only be transmitted when an infected person touched a susceptible person. The Wells's installation could not have stopped such transmission by direct contact because the ultraviolet did not shine directly on the children.

However, the children taught in  rooms fitted with ultraviolet lights were far less likely to catch measles or chickenpox than those in rooms without them, which showed that the viruses must have been transmitted through the air where the ultraviolet lights could destroy them.

The approach now known as ultraviolet germicidal irradiation (UVGI) is still in use, mostly in laboratories and healthcare settings where surfaces need to be sterilised regularly. The appearance of COVID-19 has opened discussion into the wider use of UVGI in the indoor environment. Various techniques that exist include:

Upper-room irradiation                 The system used in the Wells experiments: ultraviolet bulbs irradiate air in the upper part of the room while baffles and non-reflective paint ensure there is no line of sight between anyone in the room and the bulbs. Most useful in rooms with a high density of people like classrooms or open-plan offices, where one person can infect many others, and where the high density of people cause convection currents that drive aerosols upward into the irradiated zone.

Portable units   Ultraviolet lamps on trolleys may be wheeled into rooms that need disinfecting and left for a pre-determined time period before the cleaners enter. The approach is used mostly in the healthcare sector, where there is often a need to decontaminate a room or ambulance that has contained an infectious disease patient. The COVID-19 pandemic has driven interest in using portable units in hotel rooms, reassuring guests that they cannot be infected by the previous occupants.

Barrier irradiation           In situations where a ventilation system moves air from one occupied room to another, barrier irradiation disinfects any infectious aerosols. Applications are limited as ultraviolet barriers can only be used in spaces where there are no people to be harmed by it.

Lower room irradiation Ultraviolet lamps are placed at a low level to continuously irradiate the floor. It is used in healthcare settings where access is controlled and a safety rule to avoid bare skin below the knee can be rigorously enforced.

UVGI only takes a few seconds to destroy airborne viruses although surfaces may take a little longer. At the time of writing, it is not known whether aerosol or surface transmission is more important in the transmission of COVID-19 although it appears that both have a role to play.

Addressing the Luft (air) part of Licht und Luft is more straightforward as it's simply a matter of ensuring good ventilation. Ventilation was one of the six determinants of factors governing cold virus infection identified by the Arundel review in the wake of the 1957 and 1968 influenza pandemics, and was recently reiterated for the age of COVID-19 by a recent review authored by an international panel of experts: 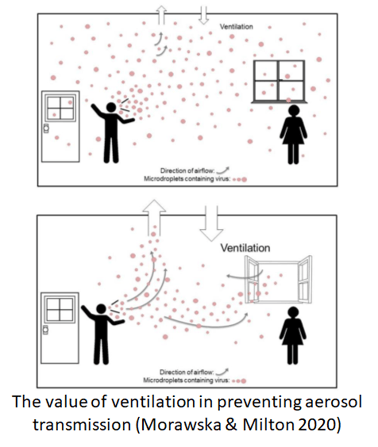 Until effective pharmacological treatments or vaccines are available to…stop the ongoing COVID-19 pandemic, enhanced ventilation may be a key element in limiting the spread of the SARS-CoV-2 virus.

When dealing with respiratory viruses, it's not just the volume of air that's exchanged that matters but also the quality of air inside the building. We're most comfortable at a relative humidity 40-60% but indoor humidity often drops below that in winter, making us more vulnerable to infection by cold viruses by drying the mucus in the upper respiratory tract which we will discuss in detail later in the series.

Modern office blocks often run their air conditioning for most of the year to counter heat produced by people and electronics. A humidifier may be a worthwhile investment for such a building, and there's also the low-tech approach of placing a glass of water on top of a radiator.

None of those mechanisms are likely to be in operation on public transport or in other shared indoor spaces such as museums and shops. There may not be much we can do about the low humidity of the air but one advantage of wearing a facemask is that by retaining the moisture we breathe out, it preserves a humid microenvironment for the upper respiratory tract and helps the respiratory mucus to protect us.

The next post in the series will cover why that is the case by describing the respiratory viruses themselves and how the built environment helps them to infect us.